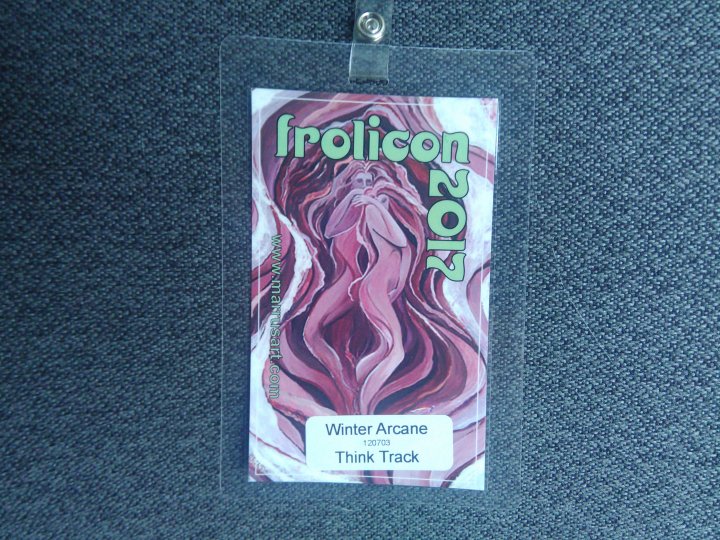 I’m still extremely bogged down in trying to get things sorted out for my pending move from Atlanta to New York City, but I wanted to go ahead and get some general thoughts out about Frolicon 2017.

The question I got most often through the weekend was how the panels I hosted went, to which I typically responded with “Two out of three weren’t complete disasters.” That exceeded my expectations but fell short of my hopes. They could have easily all been disasters under the circumstances. Not only was it my first time trying to overcome my anxiety in order to speak in front of a large group of people for an hour at a time, I was woefully underprepared because I was also struggling with getting ready for moving an unprecedented distance unassisted. Then to really kick myself in the balls, I managed to lose all my notes the day of con.

It was, frankly, a clusterfuck and I knew going into each panel that I would be putting myself through a meat grinder of embarrassment. I stuck it out anyway. As terrifying as it was, I refused to let fear keep me from doing something I wanted to do, so I did the thing anyway. It was quite the learning experience and while I wouldn’t say that any of my panels went well, only one of the three was a complete bomb owing largely to it being the one I was going to be most dependent on my notes for. It also only had a few people show up for it and something I discovered is that it’s actually a lot easier to speak to a large room full of people than 3-5 strangers whose attention is focused on you. So everything about my second panel was the perfect storm of fail.

My first and third panels, however, I stumbled through but was at least able to talk about the things I wanted to talk about and engage with the audience without spending a lot of time locked up and unsure of what to say because my brain was overpowered by anxiety. While I’m sure I still looked a fool to many people gathered, I know some people got something positive out of the panels and that’s enough for me to not count them as losses.

The highlight of the weekend for me was reconnecting with friends from out of town, many of whom I hadn’t seen in years. I’m one of those people who is terrible about staying connected to people who live far away even when I care a great deal about them. So having the opportunity to spend significant time with an assortment of people I have missed was a real delight, even if I didn’t get to spend as much time with some as I would have liked.

The convention itself felt a lot smaller and more subdued than the last Frolicon I attended in 2013. The dealer room felt positively tiny. As far as I could tell there were only two room parties on Friday night and two on Saturday night. They were less party battles than party duels, and I’ve seen walk in closets bigger than some of the spaces these parties were in. I’m not sure if there’s some sort of limitations due to the new hotel that keep the parties limited to smaller spaces (in my previous Frolicon experiences the best parties were in larger suites or connected rooms) or if there just hadn’t been anyone stepping up to

That’s not to say there wasn’t plenty of fun to be had. I had a fantastic time. It was just a little harder to find since most of the real partying seemed to be of friends grouping up to drink and debauch in their private rooms. I kind of like this because to me frolicking with ten people that are a mix of really good friends and their friends I haven’t met before in a mostly private space is just about the ideal situation, but I have a feeling that if I hadn’t known the right people I would have ended up being disappointed in the lack of mischief to get up to in the wee hours when the official programming was wound down.

Other than wishing the water coolers had been more abundant and better maintained, I don’t really have anything else critical to say about the convention. It had an excellent assortment of panels, including a lot more polyamory related panels than they have had at Frolicons I’ve attended in the past, which made me happy. The dungeon space was huge and well stocked with a wide variety of equipment. The official programming was solid. The food at the Sheraton restaurant was amazeballs.

That about covers the general overview. If I were to rate Frolicon 2017 and my personal experience of it, I’d give it four out of five stars. Now if you’ll excuse me I just found out that I have to slam my ass into top gear. At least this means that this moving stuff will soon be over and done.

I’ve mentioned before that I’ll be making my debut as a presenter on three polyamory related panels at Frolicon 2017. With the recent release of the schedule for the Think Track, I now know when those classes are.

Polyamory is the philosophy of being open to having multiple romantic relationships simultaneously and its popularity is growing rapidly. This class is for all those who are taking their first steps into the world of love without traditional limitations. Learn some of the pros and cons of letting go of romantic and sexual exclusivity in relationships, some of the red flags that give warning that trouble lies ahead, and some of the strategies that can help avoid common pitfalls along the way.

Are you and your partner unicorn hunters? Do you feel compersion when you see your partner kiss someone else? Are you friends with your metamour? Well, if you’re new to polyamory and the community that has formed around it you may not even know what the hell those questions are asking. This class is here to help get you acquainted with the unusual words found all over polyamory forums and articles.