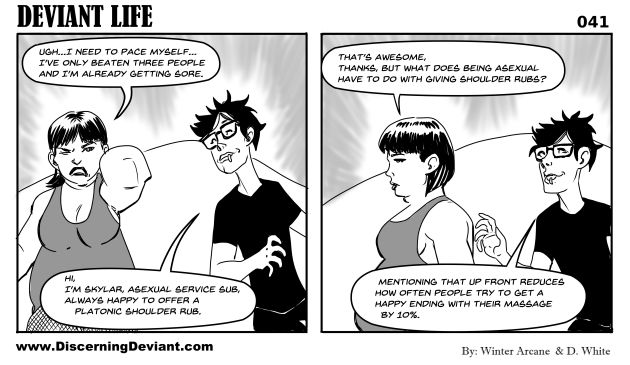 It’s Ace Week and I figured it was about damn time an asexual character made it into the comic (well, Isaac could be considered gray-asexual since he has little interest in sex itself but is comfortable having sex with people he really likes or if there’s something novel about the experience, but that really hasn’t been explicitly addressed). I’ve had one waiting in the wings since pretty early on but never found the right place for her to come in. She’s still waiting, though, because Skylar manifested and was a better fit for this strip.

Sorry for the lull in new content, my computer has been offline for most of the month. I would say that things should get back to normal but every time I say that something go drastically wrong with my health or my life in general and fucks it all up so I’m not going to tempt fate. Especially since I’m planning to move across the country, back to Atlanta, next year.